After sending editor Brandon O’Conner a press release and a PDF of my upcoming book, Orlando website Bungalower wrote an article about the book and me. Actually, Brandon wrote it.

Also, when I blogged Orlando Culture Shock, Bungalower would link readers to the blog.

Given  the nature of  Three Orlando Nightspots, I didn’t think Brandon would write about it. Remember, Bungalower is a well-respected website.  “Quality people”  rely on Bungalower for knowing the community’s happenings. They read Bungalower for quality art scenes, food truck events, local politics and local restaurant news.  Looking at that, I really didn’t expect a book containing pics of partying women would attract Bungalower’s attention. No, Three Orlando Nightspots is not for elitist quality folks. Actually, it caters more to pervs than quality bonafied people.

Yet, Brandon blogged about it.

What he wrote cracked me up laughing.  Here’s some quotes from the article.

“While the photographs, juxtaposed alongside Barnes’ poetry, read as entitled or misogynistic, they manage to capture a quasi-disconcerting side of Downtown Orlando nightlife that is often overlooked…”

This is what he said about two of my previous books.

“..both of which carry through his Male Gaze/Objectifying Observer aesthetic.”

Disturbing pics? Entitled? Misogynistic? Objectifying? I’m sorry. I think that shit is funny. Even though I may not agree with those words, they really didn’t shock me. Given the nature of my work, I was expecting comments like Brandon’s.

What caught me off guard was this line.

A part of promoting bro-culture?! When I think of bro-culture, I think of loud, obnoxious, drunk, white dudes. Looking at it now, I realize I do sometimes photograph bros, bros of all backgrounds and races.  Also, nightclubs I photographed for do cater to bros. Especially when they show advertisement containing drunk college girls.

Yes, I can see where advertisement like this caters to women, and not bros. Also, I guess women patrons enjoy seeing half-naked VIP bottle girls.

Oh no, that ain’t catering to bro-culture. (For the record, I am rather proud of my booty pics.)

I ain’t offended by the article.  I just never associated my photography and documenting with bro-culture.

Also, for the record, Brandon mentioned after my contributions to Downtown Orlando’s bro-culture and drinking scene, I was fired for uploading this pic containing a drunk bro of color.

In the Bungalower article, Brandon uploaded the Three Orlando Nightspots PDF. Also, he added a link where you can download the PDF free. Just click right here.

After all of Brandon’s talking shit about my book, I found out how many views the PDF actually received. 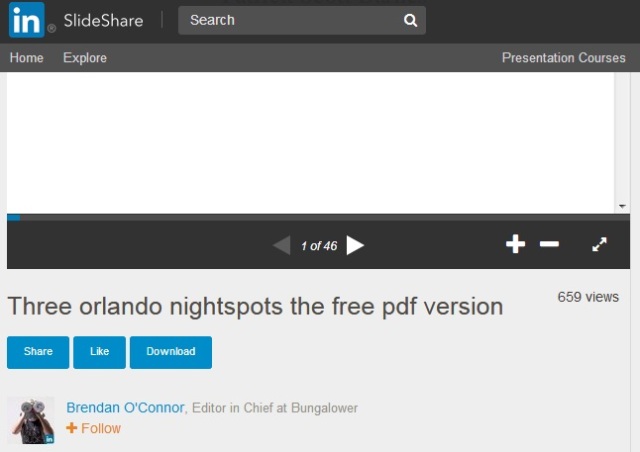 Let’s get a closer look.

Yet, after reading words like “misogynistic” and “objectifying”, folks still looked at the book.

So, I’m a part of promoting and documenting bro-culture. I’m still laughing about that shit.

A huge thanks to Bungalower for the blog. Let’s boogie.